Meandering Means to Make Meaning of "Meaningful Use"

Unless one is closely following the day-to-day activities of the government as it relates to the health information technology (HIT) world, the importance of "meaningful use" and how it is coming to be defined is hardly stimulating. Acronyms make matters worse. Just when common information technology (IT) acronyms, such as "IT", are becoming increasingly familiar, unfamiliar phrases like "meaningful use" are turning into "MU". As a consequence, the average person attempting to follow these activities will quickly feel as though overdosed on a CNS depressant...oh, and that reminds me, medical acronyms like CNS (central nervous system) are also being thrown into the mix. So in today's blog entry let's see if an explanation of the importance, timeline and participation in the current "meaningful use" activities can be simplified. Here we go!

Importance: The American Recovery and Reinvestment Act (ARRA) authorizes the Department of Health and Human Services (HHS) through the Centers for Medicare & Medicaid Services (CMS) to provide incentive payments to physician and hospital providers who are "meaningful users" of "certified" electronic health records (EHRs). These incentive payments begin in 2011 and gradually phase down. Starting in 2015, providers are expected to have adopted and be actively utilizing a "certified" EHR in compliance with the "meaningful use" definition or they will be subject to financial penalties under Medicare and Medicaid. Who gets part of the $20 billion of incentive payments is dependent on how  "meaningful use" and "certification" are defined.  ARRA created two advisory committees, the HIT Policy Committee and the HIT Standards Committee, to make recommendations to HHS on the incentive payment roadmap. Both Committees report to the Office of the National Health IT Coordinator (ONC) which operates under HHS and is led by the "health IT czar" David Blumenthal, MD. How "meaningful use" is described will essentially set the priorities for the Standards Committee and be a major influence on how "certification" is defined.  The Policy Committee is developing key objectives that they want "meaningful use" to achieve and establishing metrics for each of those objectives.  These specific objectives and measures will describe what physicians and hospitals will need to do in order to qualify for part of the $20 billion incentive payments.  This has caught the attention of many.

Timeline: The HIT Policy Committee formed a Meaningful Use Workgroup earlier this year to begin hammering out a proposed definition of "meaningful use." The HIT Policy Committee held their first meeting this week on Tuesday, June 16 and discussed the draft proposals from the Workgroup. The Policy Committee will meet again on July 16 to discuss revisions that the Meaningful Use Workgroup makes to their proposals based on this week's meeting and public comments. HHS will consider the recommendations provided by these groups and is expected to issue rules by the end of this year.  This is by necessity an extremely short timeline considering the complexity of EHRs and other health IT tools, the length of time it takes to successfully implement these tools and the fact that "meaningful use" requirements are attached to the 2011 incentive payments.

Participation: Since the HIT Policy Committee is operating under the transparency of the Federal Advisory Act (FACA), it makes available a public transcript of the June 16 meeting on the ONC website and has provided for a 10-day period of public comment on the proposals. For those interested, the period open for public comment on the initial draft ends on June 26. Included in the public transcript of the June 16 meeting is a draft of the Meaningful Use Matrix which appears to be the core tool that will be used to define "meaningful use". It is a matrix design because the definition of meaningful use is phased in, becoming more challenging in each of the 5 years. The focus of comments to ONC right now should be on the specific objectives and measures proposed in this matrix since incentive payments will be based on these. It has not been decided whether another comment period will be offered after the July 16 presentation.

The Meaningful Use Matrix can be summarized at a very high level by this slide from the Workgroup's presentation.  It shows that incentive payments will begin in 2011 with "Pay-For-Reporting", phase into "Pay-For-Using" and mature into "Pay-for-Outcomes" by 2015.  In other words, initially the incentive is to get providers using EHR tools to capture certain health data and be capable of reporting on that data.  The next phase is to incenticize providers to actually use IT tools and health data during patient encounters.  The last phase is to stimulate providers to demonstrate improvements in patient outcomes through the use of the IT tools. 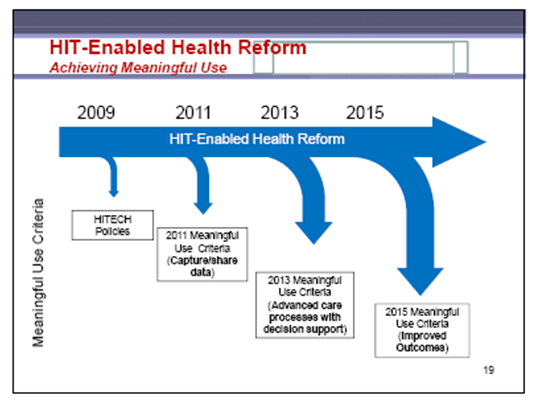 So, there above lies the simplified explanation of the importance of the current "meaningful use" activities. For insomniacs, "take" two readings of this blog for the full CNS depressant effect!

The comments to this entry are closed.