Return here on February 25th, 2010 at 10:00am EST for live streaming video coverage of the bipartisan discussion on health reform.  Listen for issues where health information technology provides solutions especially during discussions about quality of care.  A White House website provides more information on this meeting.

New federal funding for the adoption and use of electronic medical records (EMRs) is accelerating progress on many existing health information technology (HIT) initiatives, providing a jump-start for some languishing HIT efforts and triggering other innovative activities.   Most of the additional funding is designated as incentive payments to physicians and hospitals that successfully adopt and use EMRs.   Some of the new funding is targeted for the development of technical infrastructure and processes that are needed to maximize the value of EMR usage by clinicians.

Over the next year decision-makers at the federal, state and local levels will determine how billions of dollars will be spent on HIT over the next decade.   Physician participation in these decisions will help maintain a focus on using HIT to improve quality of care and patient safety.  The following information is an overview of the HIT landscape at the federal, state and local levels.

The American Recovery and Reinvestment Act of 2009 (ARRA), commonly referred to as the $800 billion Recovery Act, designates $19 billion toward the adoption and use of EMRs.  In particular, the bill provides $17 billion of incentive payments to individual physicians and hospitals who demonstrate "meaningful use" of EMRs.  Medicare physicians may qualify for a maximum of $44,000 based on 75% of their annual Medicare payments (see chart below).  The Medicaid incentive payment formula is different and based on the actual implementation and operating costs of the office EMR.  Physicians with a Medicaid patient mix >30% may qualify for up to $63,750 and those with a Medicaid mix of 20-30% may qualify for 2/3s of that amount. 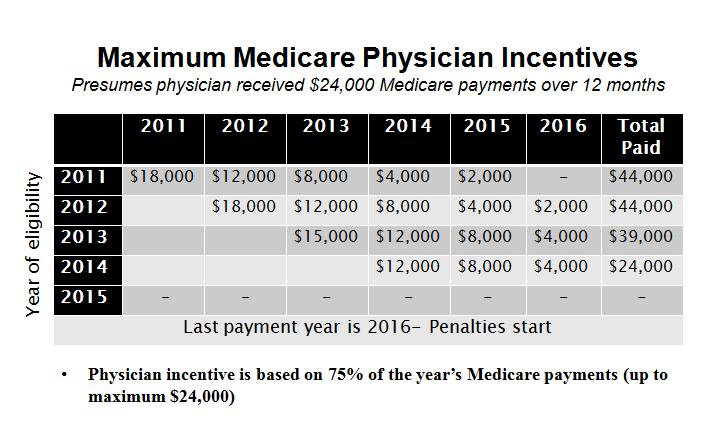 In order to qualify for incentive payments ARRA requires physicians  to demonstrate "meaningful use" of an EMR.  The Department of Health and Human Services (HHS) is defining "meaningful use" based on the following guidelines:

HHS has released details on the preliminary definition of "meaningful use" and the final definition is expected later this winter or early spring.  A website hosted by the Office of the National Coordinator of Health IT (ONC) provides more details and ongoing updates on physician incentives and meaningful use.

ARRA funds are also available to create about 70 RECs spread geographically across the nation.  Their purpose is to provide assistance to physicians in the successful selection, implementation and meaningful use of EMRs.  RECs will focus assistance on small physician groups and rural physicians.

In Texas there are four non-profit entities that are collaborating with each other and have segmented the state to assure full coverage of every county.  These four grant applicants are anchored by UT Health Science Center Houston, the Dallas-Fort Worth Hospital Council, Texas A&M Health Science Center and Texas Tech Health Science Center.  The Texas Medical Association (TMA) and other state organizations are working collaboratively with each of the grant applicants.   Each REC has committed to a 50% physician representation on their governance boards.  Under the proposed plans local Tarrant County physicians will have access to the North Texas Regional Extension Center (NTREC) where Matt Murray, MD (Fort Worth), David Bragg, MD (Dallas) and Kenneth Haywood, MD (Tyler) are physician board members.  The federal REC grants are expected to be announced in March 2010.

Technology and processes exist that can provide physicians access to a consolidated set of patient data that was entered into electronic systems at hospitals, labs, pharmacies, radiology centers, emergency rooms or even other physician offices who use different EMRs in the community.  An entity that provides this "connecting" infrastructure is called a health information exchange (HIE).  The value of an ambulatory EMR increases significantly if there is a local HIE to connect to that provides the physician online access to data about his patients that has been entered in other systems across the community.

At a national level the National Health Information Network (NHIN) effort is establishing standard models for the exchange of health information between EMRs.  The federal HIE Cooperative Agreement Program created in 2009 will provide federal grants to each of the 50 states to develop HIE infrastructures at the state level.  In return the states are expected to align their HIE models with NHIN standards.

In December, 2009, HHS announced that the Texas Health and Human Services Commission (HHSC) will receive $28.81 million over four years to fund the planning and implementation of HIE networks.  HHSC contracted with the Texas Health Services Authority (THSA) to develop strategic and operational plans that describe how Texas will create a robust HIE infrastructure.  THSA consequently created four workgroups and, with assistance from the TMA, appointed at least one Texas physician on each workgroup:

There are currently over a dozen HIE entities in Texas in various stages of development.  Sandlot is an operational HIE in Fort Worth.  The DFW Hospital Council is leading another local HIE effort that is in a developmental stage.  Lessons learned and work already completed by existing HIE entities will be leveraged as the Texas HIE model develops.

House bill 1218, 81st Legislature, Regular Session, 2009, requires HHSC to establish an HIE pilot for the exchange of Medicaid-related data.  A 16-member HIE Advisory Committee with Joe Schneider, MD (Dallas) serving as chairman was appointed to assist with the development and implementation.  The TMA worked to ensure adequate physician representation on this advisory committee as it is likely that the Medicaid pilot project will influence the statewide HIE model development going forward.

Building consensus among providers, payers, consumers, HIT vendors and other public, private and government entities is difficult but vital for technology to be successfully used in health care.   Perhaps the most encouraging trend over the past year is the increasing number of successful collaborative efforts such as those outlined in this overview.