Over 400 electronic health record (EHR) vendor products are certified by the Office of the National Coordinator of Health IT (ONC), but only a handful of them are used by a majority of the physicians in Texas who have been awarded EHR incentive payments by the Centers for Medicare and Medicaid Services (CMS) according to an ONC database released last week.

Physicians who successfully meet CMS criteria that demonstrate their “meaningful use” of an ONC-certified EHR become eligible for incentive payments up to $44,000 over 5 years under the Medicare program or $21,500 over 6 years under the Medicaid program. The ONC database includes the records of 21,697 physicians who have received EHR incentive payments so far, de-identified by physician but including the physician’s EHR product name, the physician’s state and whether payment was received through the Medicare or Medicaid programs. There are 217 EHR vendors listed as having products that had been used successfully by at least one eligible physician.

The following graph displays the 25 EHRs that at least 10 Texas physicians have used to achieve meaningful use payments (click to enlarge): 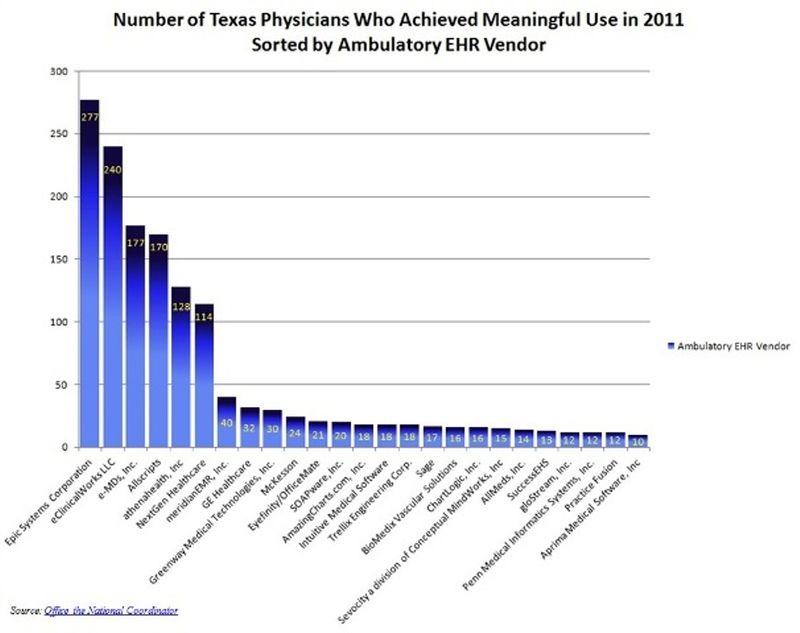 There are 50 other EHRs used by less than 10 physicians in Texas who have successfully attested for meaningful use incentive payments.   These are listed at the end of this blog.

Across the nation Epic is the early leader with over 25% of physicians using it to achieve meaningful use. The top five EHRs nationally–Epic, eClinicalWorks, Allscripts, athenahealth and Community Computer Services–are used by nearly 49% of the physicians.    The top 13 EHR vendors nationally are used by more than 75% (see list below).   There are variations in regions across the nation, though, as seen with the Texas data.

It is interesting to note in Texas that the first three of the top six EHRs used to achieve meaningful use–Epic, eClinicalWorks and e-MDs–are all private companies.   The other three are public companies–Allscripts, NextGen and athenahealth.  They all all generally have positive reputations and perennially receive a variety of “Best in KLAS” rankings.    Epic’s ambulatory EHR is used primarily by physicians affiliated with large health centers and is not currently a feasible option for many small practices in rural Texas.    Athenahealth is marketed as a web-based EHR, but the others can be web-based as well.   Although e-MDs is popular nationally, their market share in Texas benefits from their headquarters being located locally in Austin.

In the past decade many speculated that CCHIT certification of EHRs, which is more comprehensive than the ONC-certification for meaningful use, would spur a consolidation of what is currently a disperse EHR market with hundreds of vendors supplying products.  Others felt that free market forces, with physicians in the center creating demand for EHRs that worked well, would eventually swing the pendulum toward consolidation.   It is still early, but the data set in the ONC database gives a provocative glimpse at the EHR market forces in play today.  There is clearly some consolidation around a small number of EHR products after the first year of the CMS EHR Incentive Program.    I suspect physician demand for EHRs that simplify their ability to receive incentive payments will continue to play a significant role in swinging the EHR market pendulum towards consolidation over the next decade.

The top 13 EHRs used by physicians nationally for EHR incentive payments were:

The following 50 vendors had less than ten physicians in Texas using them to achieve meaningful use incentive payments:

The comments to this entry are closed.