Today I (as @drmattmurray) and @TexMed moderated our first Twitter Chat that focused on the topic of e-prescribing. To participate in a Twitter Chat a physician must have a Twitter account and must know the date, time and Twitter hashtag for the Twitter Chat.  In our case the hashtag-- #eRx630--refers to e-prescribing and the date, June 30th, by which time physicians must meet the CMS requirements regarding the use e-prescribing. Physicians who fail to use a qualified e-prescribing system or certified EHR to enter at least 10 e-prescriptions during eligible Medicare encounters will incur a 1% penalty on 2012 Medicare claims.    On the other hand, those who meet this requirement are eligible for a 1% bonus.

Despite the high importance of this subject matter, there were not any other physicians participating on this particular Twitter Chat.   At least none that we heard from.   It was lonely.

However, we considered this to be an experiment and a chance to experience what it is like to actually moderate a Twitter Chat.    Without a lot of participating "chit-chat", it was difficult to coordinate questions and answers with my friends @TexMed and @TexMedHIT.     We basically asked each other questions or even asked ourselves for our own answers.  I think we did get out some excellent information, but this would have been more valuable with some active back-and-forth dialogue.   Again, though, the purpose of this venture was to dip our toes in the water to see how this type of format could be used in the future.

Twitter Chat among physicians will certainly have challenges, but I think it will find it's place as a useful mode of communication for specific purposes and in certain situations.  The format will need to be refined, and this means we will have to try it (like today!), experiment with it, refine it and keep doing that PDSA thing to it (Plan-Do-Study-Act).   Eventually it will find a place where it serves as an effective way to communicate some things.     I already have found Twitter useful at large medical conferences that use a hashtag to communicate real-time information.    It is a matter of finding the right niches.

One of the useful aspects of a Twitter Chat is that a transcript can be created of the entire conversation.  This means that you don't have to be "online" and engaged in the Twitter stream for the entire duration of the chat.   Since most physicians are hard pressed to find an un-interrupted hour, they would find it very helpful to be able to access and peruse the transcript at their leisure.

Here is a transcript of today's Twitter Chat #eRx630: 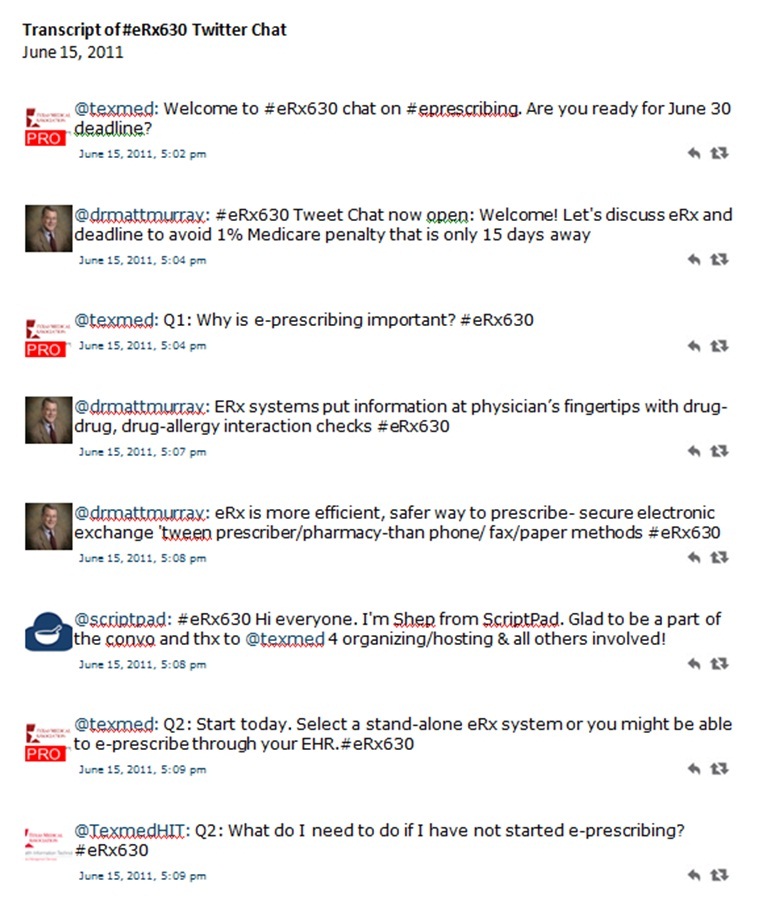 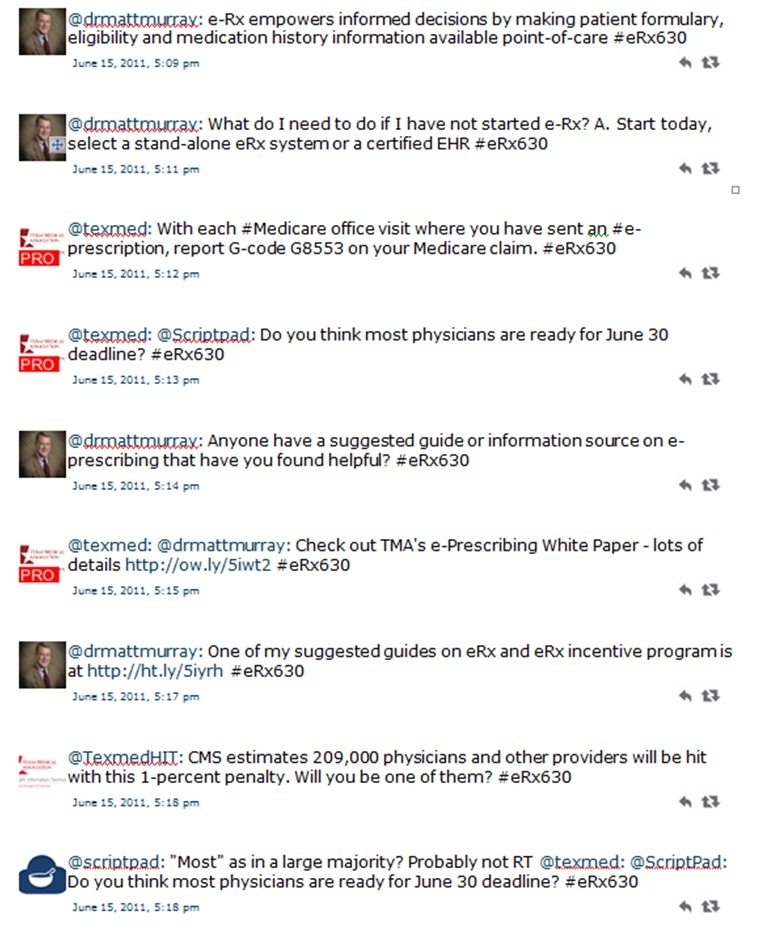 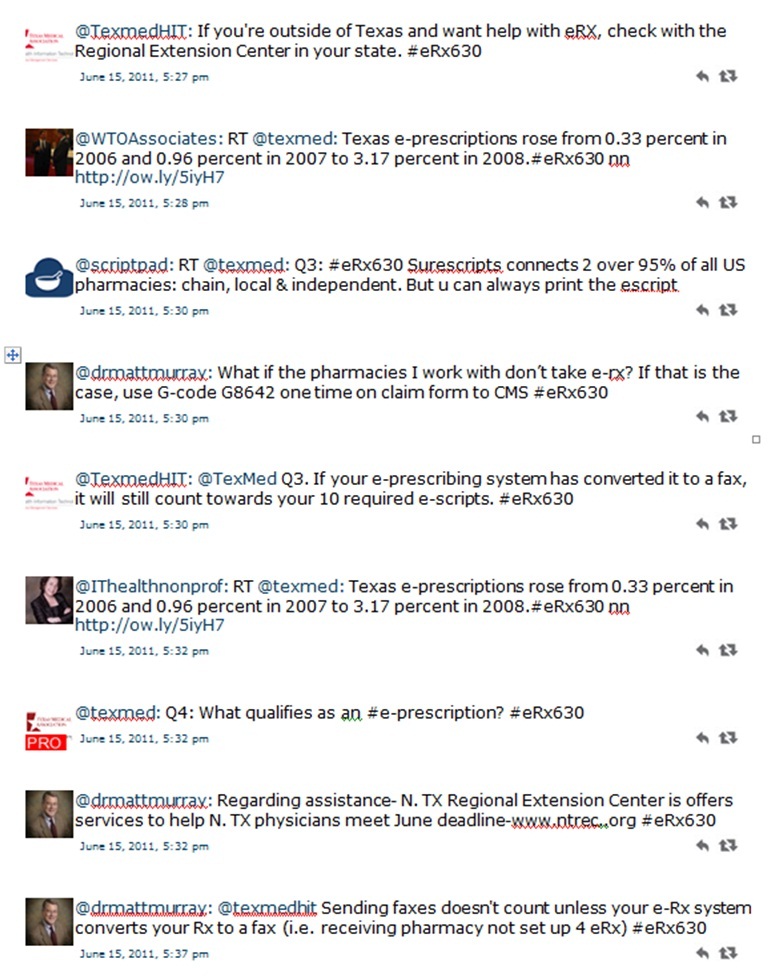 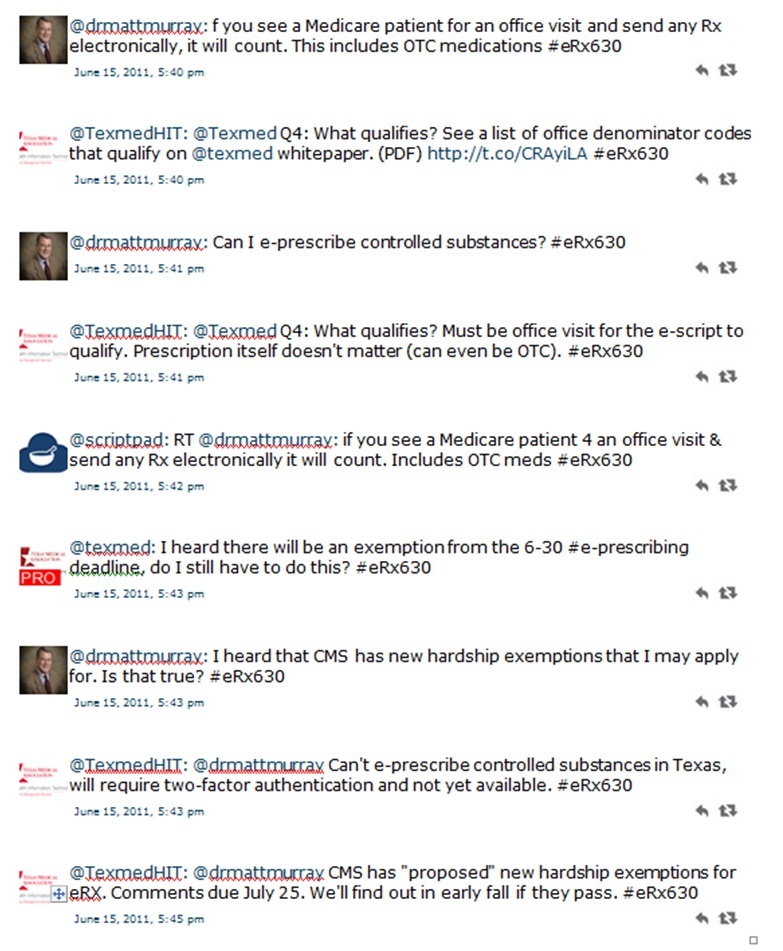 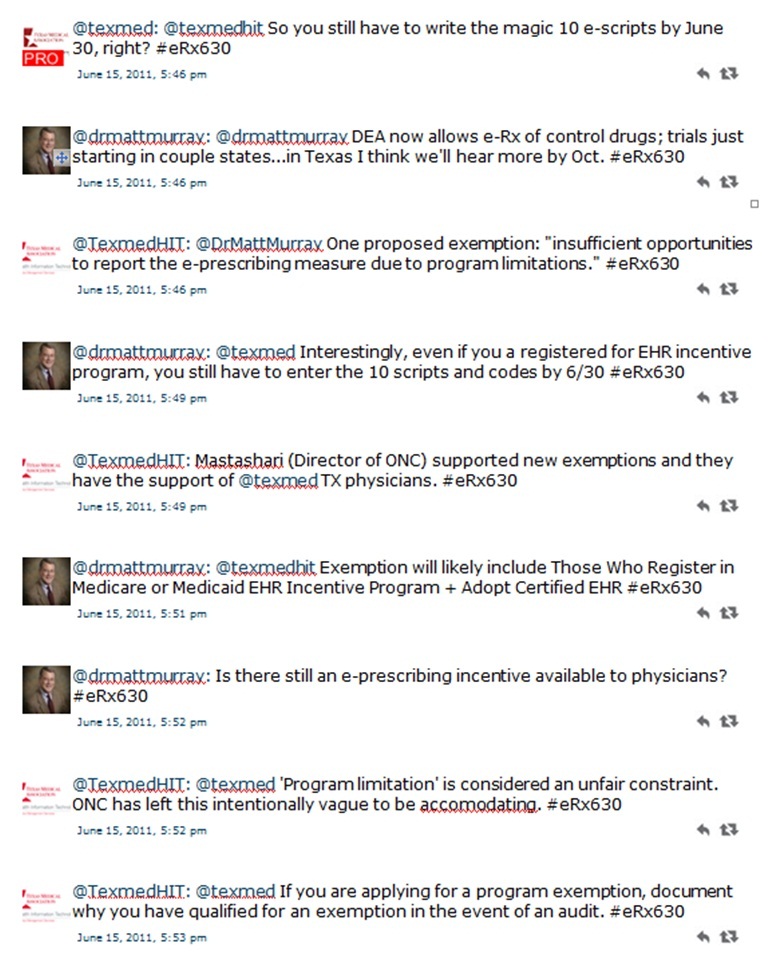 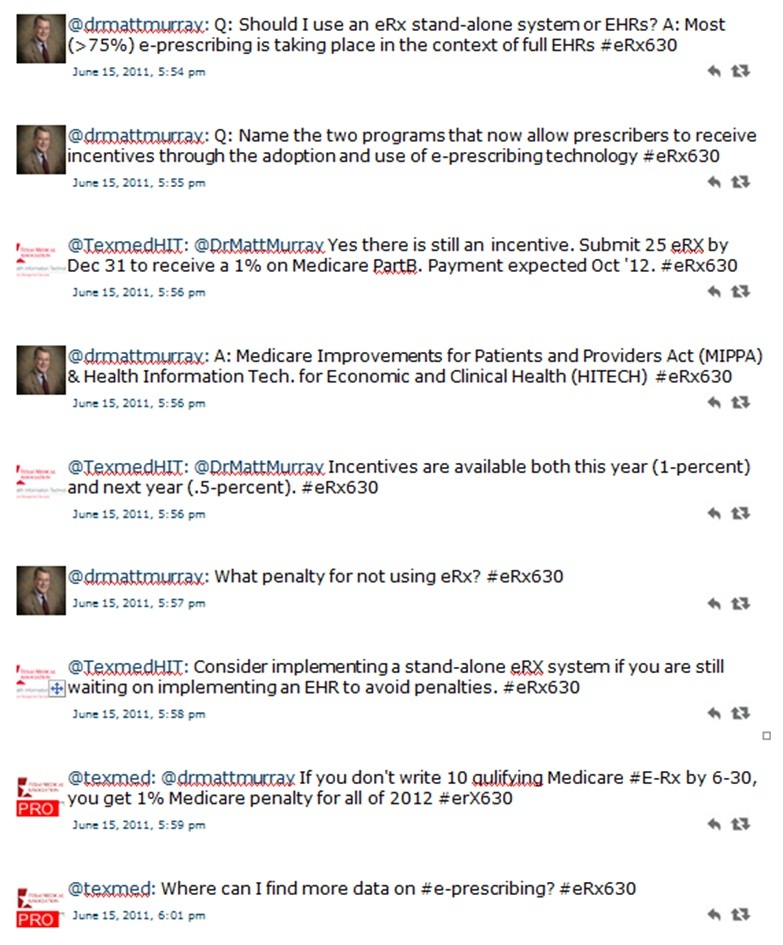 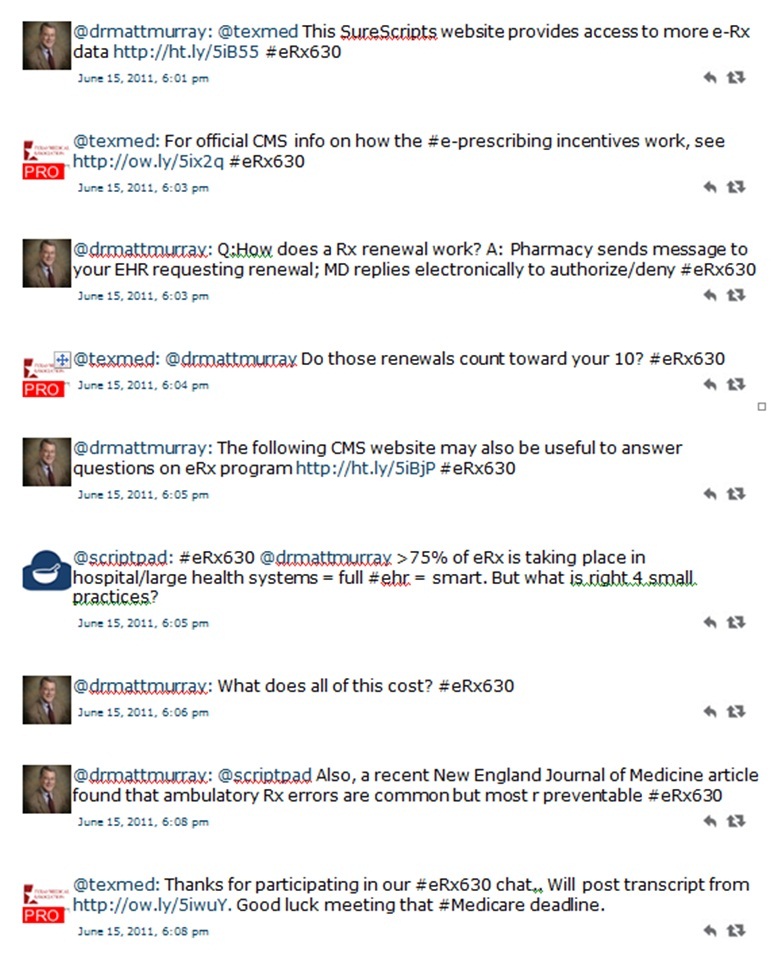 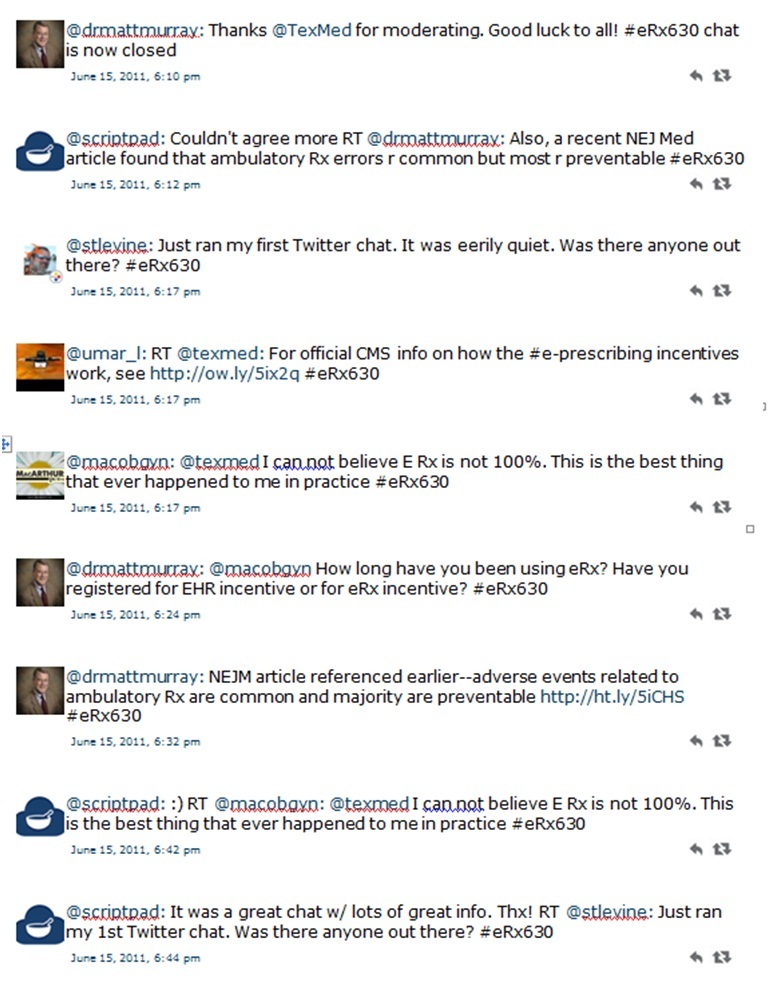 Physicians and Social Media: What's Up, Doc With Unprofessional Behavior?

I wonder how many physicians who used social media for the first time yesterday were aware of the risk they were taking?   Did they realize that unprofessional behavior involving social media could actually threaten their license to practice medicine?   These thoughts motivated me to blog about the risks of social media that are unique to physicians.   My intent is not to cause Henny Penny alarmism and avoidance of social media.   After all, I obviously engage in social media for leisure as a practicing physician myself and enjoy it very much.   Instead, I want my colleagues to feel confident using social media, but with full awareness of the inherent risks, all of which are manageable including many that are avoidable.

Social networking sites will often publically display personal identifying information unless one actively omits them from public view including home address, e-mail addresses, home phone number, mobile phone number, race, religious preferences, sexual orientation and political views.   Also, when you associate with someone on a social networking site you provide them access to personal content that is not available to others on your public page.   The personal content could include personal identifying information, pictures, personal messages and even messages posted to your page from other people.

A recent survey (JAMA. 2009;302(12):1309-1315) revealed that a significant number of medical students have personal Facebook accounts with personal identifying information available to the public.  In addition to this privacy exposure, some had also posted unprofessional content on Facebook such as:

Posting unprofessional content on a social media website could be judged by a credentialing body, such as the Texas Medical Board, as a reason for disciplinary action that could place the physician’s license to practice medicine at risk.

“Unprofessional content” can be defined to be any content that shows, implies or suggests that a physician has failed to adhere to professional behavior.   Content posted on a social media site that explicitly shows a physician engaged in illegal or unethical behavior is obviously unprofessional.   But how can physicians  distinguish the border that separates "acceptable" content from "unprofessional" content?

Consider the core curriculum on “Professionalism” that the Accreditation Council for Graduate Medical Education (ACGME) uses for physicians-in-training.   This curriculum includes training on professional behavior in areas such as:

The line that distinguishes sensitivity from insensitivity to human diversities is perhaps the most difficult one for physicians to discern when communicating on the Internet.   Content that includes insensitive comments on gender or other human diversities falls into the category of unprofessional behavior.   Unfortunately, the diverseness of individuals and cultures can sometimes make it very difficult to anticipate a perception of insensitivity.   The best advice is to avoid comments that have even a remote possibility of offending someone.

Also, physicians who understand and adhere to patient confidentiality in their daily practice will be vulnerable to breaches of privacy when using social media if they fail to understand the lack of anonymity when using social media sites and the permanence of any content they post.   In spite of using “alias” names, no one is really anonymous on the Internet.   There are many examples of people (including doctors) who presumed anonymity but ended up with serious legal difficulties.   The permanence of posted content is due to the nature of social media.   Even if one deletes their entry, it is possible that other social media sites have already linked to that content and/or reposted it elsewhere.

The bottom line is that physicians should realize that whatever they write on the Internet not only is permanent, but is also traceable to their actual identity.   Physicians are wise to gain more insights on social media risk management by discussing it with their personal lawyers and seeking information from their professional organizations and journals (such as these articles from the American Medical Association and New England Journal of Medicine).

Raising awareness of the risks that social media present to physicians is prudent, not alarmist.  I want other physicians to safely enjoy social media as I do.    BTW, I expect you to now read my Terms of Use, Disclaimers, Warranties and Waivers.   And agree to hold this Author harmless.

The Use of Twitter to Communicate With Patients, Clinicians...

The way that the Center for Disease Control (CDC) is using Twitter during the H1N1 influenza situation has changed my perspective about the use of online social media in healthcare.  I previously wrote off Twitter as a fad or phenomenon that would fade away as quickly as it appeared.  I could not see value in communicating information in less than 141 characters. However, I found that I did gain value when I began following the CDC's swine flu "tweets" (@CDCemergency), especially during the first few weeks of the H1N1 influenza situation.  When the CDC discovered new information or developed new recommendations, they not only posted it on their website, but they also used Twitter to alert followers that there was new information or recommendations posted (with hints regarding the subject of the new content).  The "tweet", which I set up to come through my iPhone, often included a brief summary and a link that conveniently took the follower directly to the full content of the new information which was posted on their website.  This saved me time as I did not have actively look for new content on the website if I had not been alerted by Twitter.  I also did not have to surf through the CDC websites to find new information.  This spurs me to seriously consider how I might use Twitter and other social media within my practice of medicine.  I already recognize the value of blogs.  At my son's college, for instance, the dean uses a blog to communicate with his large, diverse community of students, parents, professors and so forth.  He even posts YouTube videos of some of the "happenings" at the University.  I like that as a parent.  So, it has got me seriously thinking about how I might use Twitter and a blog site to allow me to more effectively reach out to my adolescent patients who are quite comfortable with this new type of social interaction.  Perhaps there is a place for Facebook in my practice as well, but will take things one step at a time.  Certainly any large physician group or even a healthcare system could use these social media tools to more effectively communicate with patients, parents and families just as the dean at a University does.   Some are beginning to do that.  Not exactly sure how this will all work out...but I figure the best approach is to jump in with something, get feedback and continually adjust it.